Is this a legal bedroom? 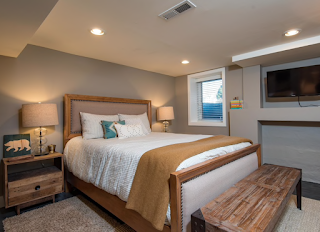 I had a beautiful single family home listed recently that brought some interesting questions to mind. What makes a legal bedroom? What are the benefits of having an additional legal bedroom? Is making that basement "den" into a legal bedroom affordable? Is it worth it? So, I thought I'd blog about it!

Many people who are fortunate enough to have a finished basement have some sort of room down there that's being used as a guest room. However, when listing a property, many people ask the question, "is this a legal bedroom?" According to building codes in the state of Virginia, there are several things that are required to answer that question with a "yes!" First, the room has to be of a certain size at minimum. Specifically, it must be at least 70 square feet (or 100 square feet if there are two people living in it), and it must have at least 7 foot ceilings. The room also has to have access to a bathroom, without having to go through another bedroom to get there. In addition, you have to be able to heat the room, either with vents from the HVAC system or baseboard heating (space heaters do not count).

So that brings me to perhaps the most important point, and certainly the one the that is most debated. The room has to have two means of egress (or exit), one of which must lead directly outside. That means the room must have at minimum, a door by which you enter AND a window or door leading outside. If it is a window, it can't be one of those small transom windows either. A person, specifically a fireman in full gear, must be able to enter and exit the room through that window in case of a fire, so it has to be at least 20" x 24" (or 5.7 square feet). The window also must be accessible, so no more than 44" from the ground. It's important that the window is operable and doesn't have any bars or grates covering it. Now, the window does not have to be at ground level, so it's alright if it's in a well with a ladder.

One common misconception is that you just have to have two exits in the room, so some people will finish a basement with a room that has two doors in it and try to call it a bedroom. However, unless one of those doors leads directly outside, it does not count! Two doors leading into the rest of the basement does not satisfy the fire safety codes. Another very common misconception is that you must have a closet in the room for it to be considered a bedroom, but you actually don't! Interestingly, closets are not required in the building code.

Is it possible to turn that basement "den" into a legal bedroom? That of course depends on a number of factors, as detailed above. But assuming the room meets the size and height requirements and has access to a bathroom, the biggest question is: does the room have at least one exterior wall? If the answer is yes, then it is possible to put in an egress window to make that room a legal bedroom. As I noted before, the window does not have to be at ground level. With that in mind, in order to make the room a bedroom, you'd need to add a window, and the way you'd do that is to dig down and create a window well (with a ladder depending on the depth of the window).

I'm sure you're thinking, "that sounds expensive!", but you might be surprised. The average cost in Loudoun to install an egress window is between $1,500-3,000 and is largely dependent on the amount of excavation required. (So if your basement is completely below ground, it will be the most expensive, but if you already have a transom window, the cost won't be as high.) Of course, that is no small amount of money, but when you have the potential to sell your home for an additional $30,000+ just because you put in the window and made that bedroom a legal one, is it worth it? I say yes!
Posted by Kelsey Crossett at 9:04 PM No comments:

Welcome to my blog! My name is Kelsey Crossett and I’m a Realtor in the Northern Virginia area. I decided to start a blog to help out those who are in the planning stages of buying or selling a home. Whether you are a first-time homebuyer, looking for an investment property, or looking to sell your home and move, I think you will find some helpful tips and tricks. Please feel free to leave feedback or even requests for blog topics! Enjoy!